Week of non-violent action for the climate
Extinction Rebellion Te Whanganui-a-Tara
From Monday the 15th of April to Sunday the 21st, Extinction Rebellion Te Whanganui-a-Tara will be joining groups around the country in a week of non-violent action for the climate.
Gathering of Rebels
On Monday 15th there will be a Gathering of Rebels public meeting featuring a range of speakers about the crises we face as a society. It will be held at Rutherford House, Lecture Theatre 1, beginning at 7pm. 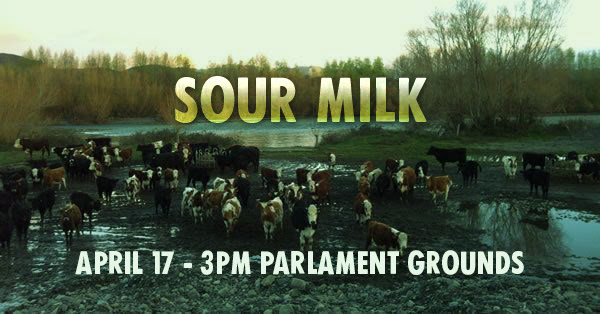 There’s a sour side to our white gold. It’s time to face the people who profit from the destruction of clean waterways. Dress up as a cow and listen to fresh-water ecologist Mike Joy speak about industrial dairy farming and its impact on Papatūānuku. Join us in a cow onesie in front of the beehive to demand our government tell the truth about its water management practices and take action immediately to clean up our sour milk.

The Week of Action will climax in a human wave for action on climate change on Saturday 20th. The wave will be gathering at Waitangi Park at 11am before moving throughout the city to symbolise the threat of rising seas and coastal inundation. “We would like to warmly invite everyone who wants strong action on climate change to come along and show that the seas are rising but so are we,” says spokesperson Dr Sea Rotmann.
She continues, “our human wave will be showing the threats of rising sea levels and coastal inundation. The government needs to be taking stronger action and the City Council and Regional Council need to be focusing on ways to make our city more sustainable. Let’s invest in walking, cycling, and public transport that works for lots of people, not waste billions on motorways and airport extensions that make climate change worse.”
“Some of those most at risk from climate change are those who already get a raw deal in our society. All action on climate change must be strong, inspirational and transformative to make our world a fairer, safer and sustainable place.”
Given the shocking events in Christchurch, and continued high security presence of armed police throughout the country, Extinction Rebellion Te Whanganui-a-Tara wants to express clearly that we are an inclusive organisation committed to non-violence.

Dr Sea Rotmann says, “We were all shocked by the events of 15th March. The School Strike 4 Climate displayed real hope and this was crushed by the shootings in Christchurch.
Racism in this country is real and we don’t do ourselves any favours by pretending that there are no problems in this country.”
“That Friday displayed two things we can expect more of in the future. As the effects of climate change becomes increasingly real, people will take increasing strong stands for meaningful action. As a country we will need to take on more and more refugees and migrants, particularly from our Pacific neighbours. We must expect a racist response to this. Xenophobic and ignorant language will rise and we need to be prepared for this.”
Extinction Rebellion Te Whanganui-a-Tara is campaigning for: